As many of you know I recently made a huge shift in my life and lifestyle by leaving my job on the road and moving back to New York. It’s been almost 3 months since that change happened (wow…time has flown by!) and I am now in the process of getting settled into my life back in NYC. New apartment, furniture shopping, making new friends and reconnecting with old ones, re-introducing myself to the city and sifting through the boxes and bins that hold pieces of my life, work, and travels; those are the activities that have consumed my time for the past few weeks.
Last night, while I was sifting, I came across a card that was given to me by a former professor…in 2001. She was congratulating me on my, then, upcoming trip to Ghana…and the memories began to flood in.

GHANA
…the first trip I took that required a passport. I was a student at Howard University and had applied to a program that would send me to London for two weeks, then Ghana for two months of study and enrichment at The University of Ghana, Legon.
I remember the excitement that overwhelmed me when I learned that I had been accepted to the program. I had always known that I wanted to travel and see the world and Africa was always at the top of my list. When I dreamt of traveling the world I never imagined how it would happen, I just knew that it would happen. And it did…for the first time…in the summer of 2001.

I remember how I felt when I first stepped off the British Airways plane at Kotoka International Airport. I saw a huge sign that read AKWAABA, illuminated by floodlights that cut through the evening darkness. From my two weeks of study at the SOAS in London I knew that word meant welcome, and I felt just that.
I was exhausted but comforted by the heat that immediately engulfed me, even in the darkness of night. I didn’t know what the next two months would bring. I was excited and scared and homesick all at the same time. But I also knew that I was finally in Africa…and I was going to soak it all in.

I remember being given my day name, Akosua, Sunday-born female. I felt a kinship to one of the professors at the University as her name was also Akosua, Dr. Akosua Anyidoho. She shared with us that she was often referred to as “Aunty Akos”.
I remember the feeling of walking through Makola Market, bustling and crowded with women braiding hair, vendors selling cloth and snails, children laughing and playing, almost being pick-pocketed and knowing, FINALLY knowing what it felt like to look into a crowd and see nothing but faces that look just like yours.

In Ghana, every black person I knew in America had a twin. How reassuring to know-think-believe-see that you come from a place where everyone looks just like you.
I remember crushing on a guy whose surname was Kumah, how he looked just like my American crush, how smart he was and how gently he spoke. I went to specific internet cafes on campus just to see him, and send emails…of course!
I remember lake Bosumtwi and snacking on the tiny dried fish that had been plucked from the lake by local fisherman.
We made friends on campus and in Osu, mostly guys, who took us to Labadi beach, showed us where to eat and wondered, aloud, why more Black Americans didn’t travel to Africa. I remember conversations where we all, the Black Americans and the Ghanaians, realized that what we saw on t.v. was not the full or real story. No, all Americans weren’t rich. No, all Africans weren’t poor and starving. But yes, America to Africa and back was an expensive trip. We shopped at Woodin and lamented that we couldn’t get American junk food anywhere, not knowing that the nearby Koala Market had all the Oreos and Snickers and Hershey’s bars we could ever want.

We enjoyed concerts at the Alliance Française and the National Theatre. The sounds of traditional Highlife and the Hip-Hop influenced Hip-Life (a blend of the two) filled our ears.  This music was an aspect of our study there. The rhythms were foreign and familiar, all at once. 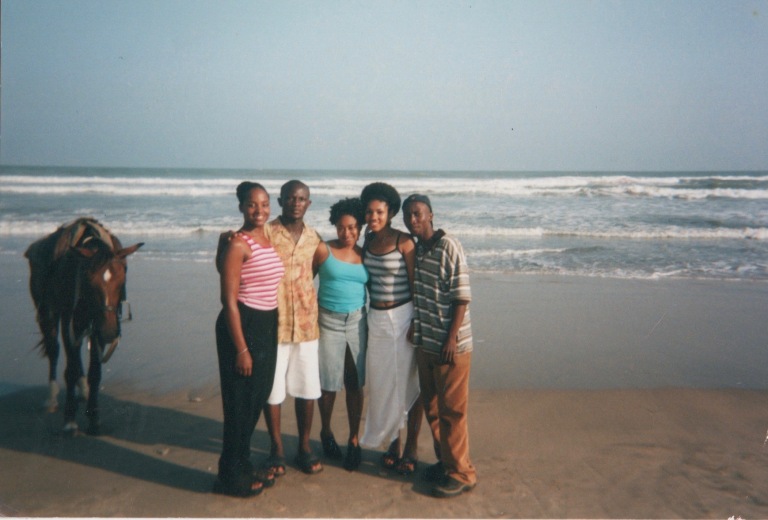 Our friends on campus introduced us to red-red, which quickly became my favorite dish. They cooked traditional Ghanaian dishes for us, foods I’d never encountered growing up in Ohio. For the first time I dined on plantains, cocoyam and banku, fufu and groundnut soup, palaver sauce and boiled-fried egg. I also remember eating so much chicken and rice that I never wanted to eat chicken and rice again!
We enjoyed PANAFEST and marveled at the procession of palanquins, the chiefs covered in gold and draped in fine cloth, the drummers and dancers and stilt walkers. 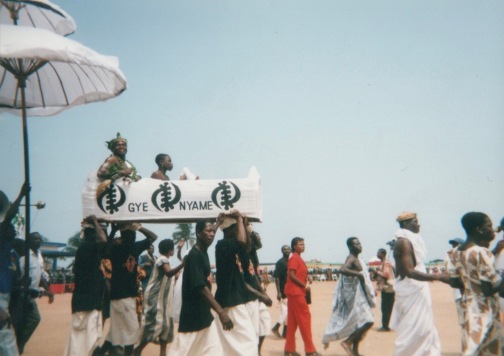 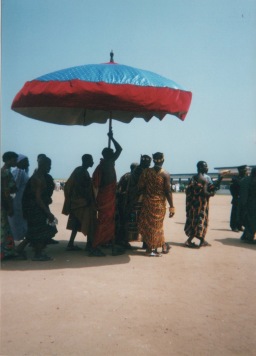 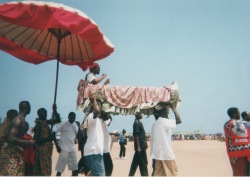 We visited Cape Coast Castle; the alliteration of its name was the only thing lovely about it for it held the horrific history of the slave trade in its thick walls. How could a white governor sit in the loftiest apartment at the highest point of a fortress which held humans being treated worse than cattle? This place was now a museum of sorts, but you could feel the heat of ancestors who were steps from the ocean, steps from being separated from their land, country, language, culture, families. Their spirits hung heavy with the heat, their voices and stories lived in the walls and floors.
My most vivid memory of that place was being shown a tiny cell where prisoners were taken when they had “misbehaved” or were too sick to live. They were taken there. And left there. To die. Our tour group was led into the room, no bigger than a large NY closet. Our guide ushered us all in…and closed the door. There was no ventilation save for a tiny square opening in the wall that was not even a foot wide or high. Our group numbered about 10 people. You could sense, but not hear, a collective gasp. The humid heat held the history of that room, sticky from dried tears and blood and sweat and every bodily function that had to have happened there. The souls that were left for dead for a day, two days, a week, or longer still lingered in that space. After about 10 seconds of unbearable silence, of held breath, of active or inactive imagination, a lone voice spoke. “Please open the door.” And we exited the room. That is a heaviness I will never forget. We made our way to the famous “Door of No Return” which led to a ship and eternal captivity in a place on the other side of the world, or death by choice or force. 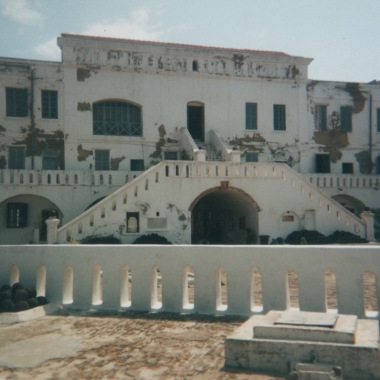 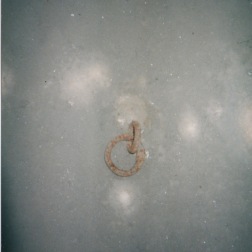 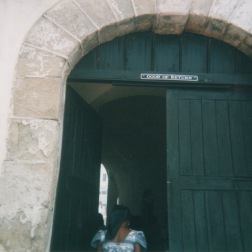 I recall attending a few different church services with Dr. Anyidoho. One was full of music and dancing. The sounds reminded me of what I imagined Mardi Gras was like, pure celebration!

I remember the tro-tro that carried us away from Accra on an excursion. The name of our destination escapes me, but the smell of Akpeteshie (a home-brewed alcoholic beverage) does not. There was a huge barrel of it in the back of the vehicle. We made a short stop and the entire barrel spilled from the back of the tro-tro when the door opened. I can only chuckle remembering the reactions of all the men around, lamenting the loss of their evening imbibement.

I remember the song that was in heavy rotation at that time. ‘Daben Na Odo Beba’ by V.I.P. We could not help but hear it everywhere we went. In every taxi, every store, on every radio. It was the hit!

I remember the beauty of the Legon campus where we studied. The old library was full of books about the history of that country, of these people who looked like me. The lush trees remained green from the rainy season. Brightly colored lizards sat in the shade under vegetation and geckos blended into the sidewalks until they were ready to scurry from beneath your tread. This was the first time and place in my life where I experienced lizards running around the way squirrels do in the U.S. The buildings had windows that remained open, allowing for a gentle breeze to move freely. The hospitality of every person in every home we visited was remarkable. Whether they had little or much we were welcome and greeted with a token of appreciation for our visit. I remember meeting Queen Mothers and talking with them about the roles and representation of women in music and the culture at large, watching women create and stamp the fabrics that I can buy in the African Market on 116th St. in Harlem. We drove through Krobo Odumase, Dodowa, Kpong, and Somanye, took lunch at the Volta Hotel overlooking the Volta River and bought fish from local vendors. We visited Kumasi and toured Manhyia Palace with its peacocks strutting through the grassy lawns. It was the first time I’d heard the name Nana Yaa Asantewa. She was a warrior and I knew that I’d never forget her name or her courage as she led an uprising which brought about the return of the captured King Prempeh I.  I never wanted to leave this place. 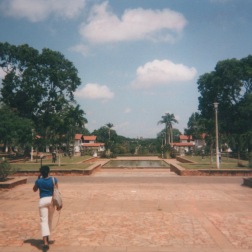 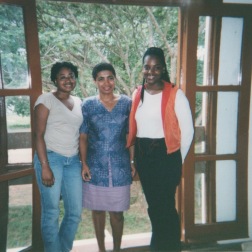 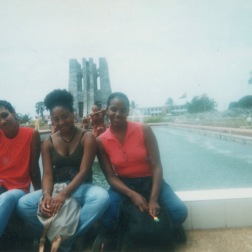 It’s hard to imagine that trip, that first venture across the ocean, was 15 years ago. It was a gift. The pictures have faded, the memories have frayed around the edges but they are still with me. Every once in a while I’ll see or hear or smell something and say “that reminds me of Ghana” and I’m back there in my memory. The change it made in me is strong. I began to see the world outside of a small town mentality. I began to question my place and my role in the global community. I promised myself and that country that I would find a way to champion it and do well for it if ever I had the opportunity. I plan to keep that promise. And I must return.