…waiting for the boat in Maiori 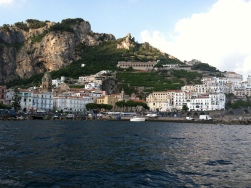 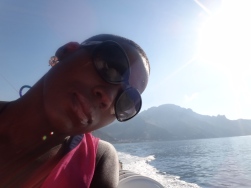 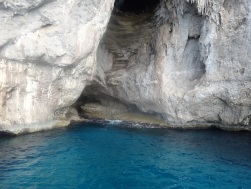 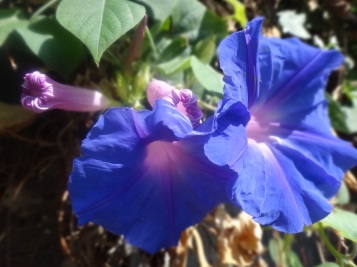 …beauty along the way

…waiting for the bus… 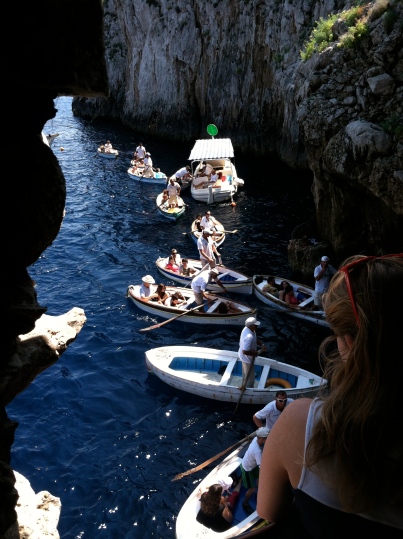 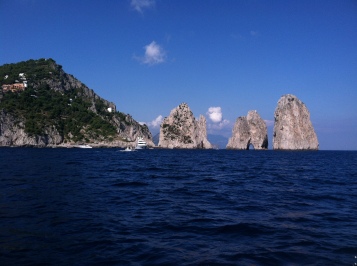 …back through the Arch of Love…

I am convinced that blue is God’s favourite colour. It’s the color of a perfect sky, of the perfect sea, untainted. It shows itself in so many shades and there are so very many ways to describe its depth. It must be His favourite.
Last evening I was chatting with a co-worker about plans for his next vacation. He mentioned Italy, truly one of my favourite places to travel. The art, history, architecture, and pure natural beauty never get old to me. And let’s not forget the red wine! Then he mentioned Naples and my first thought was “you MUST get to Capri”. Resting in the Bay of Naples, the easiest way to get to this gem of an island is to take a ferry from Naples.
It’s a wealthy place, true. The rich and famous go there to galavant with their yachts on display. There are small pebbly beaches on the island and many places to park a yacht or smaller boat and simply dive into the blue of the Tyrrhenian Sea. But the last time I visited Italy and had a chance to get to Capri, the yachts, beaches, and perfect places to swim were not my concern. I was only concerned with getting to the Blue Grotto.
I was staying in Maiori on the Amalfi Coast and took a boat from there to Minori then Amalfi then Positano and a few other stops along the mountainous coast before the almost 2 hour ride that led through the Arch of Love to Marina Piccola and Capri. After a few instructions from the captain, mainly about what time to return to the marina to catch the ride back to the Italian mainland, I started the trek up the winding staircases (I wasn’t interested in waiting in the LONG line for the bus), through hillside neighborhoods to Anacapri, the town that sits high atop the rest of the island, where I caught a bus back down the other side of the island to a dead end…either the Blue Grotto or the sea. Literally, the last stop on the route is Grotta Azzurra. The bus drops you, turns around and goes back the way it came. My Italian isn’t that great so there was a bit of a struggle along the way to know which bus to take, how to get a ticket, how/where to queue up, etc. But, determined and undaunted by the language barrier, I figured it out and made it to the bus and the queue that literally ran down the cliff side steps into the sea.
Thankfully, I didn’t have to wait too long before I was standing on the lowest step. I was next to step into a little canoe and be taken past the “payment boat” before entering the cave. I shared the canoe with a lovey-dovey couple (as a single traveller, this is often my lot) and the canoe operator who made sure that I knew to lay down in the boat as the entrance to the sea cave is quite tiny.
I followed the instructions and watched as we passed through the entrance and into the most breathtaking shade of deep sea blue I’ve ever seen.
It was all around me. It engulfed me. The ceiling and walls of the cave were deep, the water was lighter and I could see that there was light coming from somewhere beneath me. But I couldn’t tell where. This blue was the color of the sky and the sea at its most shallow point and its deepest depths. It was the color of the night sky and the color of a cloudless day. It was all of that and more. I was overwhelmed to feel that I had been completely drenched, immersed, and absorbed into a mere colour.
And then the serenade started. And of course I thought it was just for me, but the other “gondola” drivers started singing as well and it became a cave-wide serenade, echoing off every curve and surrounded by blue.
We exited the same way we entered, after a pause for a large wave that blocked the opening. Back out into the bright sunlight and the cloudless day. And I took the trek back up the cliff side staircase to wait for the bus that would take me up and over the mountain and back down the other side. I stopped for pictures of a few yachts and a little shopping in the tiny boutiques in Anacapri. And, once I returned to Marina Piccola there was time to catch some sun on the crowded, pebbly beach before heading back to Maiori.
It was the most enchanting day. I got exactly what I wanted. And I’m certain that blue is God’s favourite colour.